This year’s Annual General Meeting was yet another successful affair put on by the Chamber of Commerce. More than 40 attended the old City Hall building in Stoney Creek to enjoy some good food, see how our year has gone and experience some great networking. 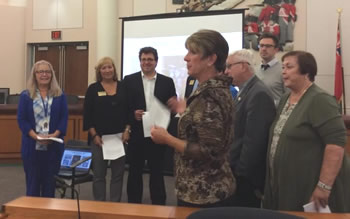 The meeting began with a greeting from Pat Legato, the Chambers President, who then introduced City Councillors Doug Conley of Ward 9 and Brenda Johnson of Ward 11.  Next, she asked the Board Members to stand and she introduced everyone: Vice President Ralph Vitello, Treasurer Lorna Rowland and the Directors: Doug McDonald, Peter Ipema, Kris Michailow, Kathy Wakeman, and Joanne Battaglia.  Unfortunately, the two new Board members (Dan Holstein and Kyle Walsh) were not able to attend due to previously planned commitments but were sworn in previously.  Pat gave the Board a huge thank you as they help to make the Chamber the success it is.

Next, Pat introduced and thanked the Chamber staff, Patti and Connie.  And then a very special thank you was directed to the Event Sponsors for the event: McHugh Whitmore, Meridian Credit Union, RBC Royal Bank and Scotiabank.  Without the generosity of the Chambers sponsors, many of their events would simply not be possible.

After that, the meeting was commenced.  After hearing no possible conflicts of interest, the minutes from the 2016 meeting were approved.  Lorna Rowland, the Chamber’s Treasurer then came forward and presented the audited Financial Statements.  Suffice to say, the Chamber is in a good position going forward, has a steady number of members, shows good signs of stability and is well positioned for further anticipated growth.

A special moment in the evening came when Doug McDonald, a Director on the Board since September 2009, was asked to come forward.  Pat presented him with a plaque and thanked him for his 8 years of dedicated service to the Stoney Creek Chamber of Commerce.  And, although he will be very missed, she did explain to him “you never really leave the board…you just don’t come to meetings.”

Both Councillors, Doug Conley and Brenda Johnson were then asked to come to the front of the room where they led the Board in renewing their Oath for the coming year.

A review of the year was also highlighted with a PowerPoint presentation showing the many events hosted by the Chamber in the previous year such as Business After5’s, Citizen of the Year Gala, Golf Tournament, Breakfast Series training, Business Before 9’s, Special Event Luncheons, and the Annual Holiday Gathering etc.  In addition, the Chamber showed their commitment to its members by staying informed and up to date on current issues by various meetings, attending events, and advocating on behalf of the membership.

Next, after an introduction by Pat Legato including a bio, Patti Hall was introduced as the Chamber of Commerce’s newly hired Executive Director. She thanked everyone for coming, thanked the board for being so supportive and great to work with, thanked Connie for all her hard work and, finally and most importantly, thanked the members of the Stoney Creek Chamber, stating “without you, there would be no chamber.”  She further explained how happy she is to be working in her hometown and helping the companies there.  She also encouraged everyone present to follow the Chamber’s social media channels as this method of communication would be increasing.  She wrapped up by reminding attendees of the 3 upcoming events during the remainder of 2017:  Business After5 at 50 Point Market (which was a fabulous event in 2016), A Luncheon with Mayor Fred Eisenberger at Liuna Station (always very informative) and the Annual Holiday Gathering at Express Restaurant (a very nice event every year).

After a motion to adjourn, members moved the Saltfleet Room to enjoy some food and networking.  And networking they did…the room was abuzz with laughter and good conversation!!!  Another successful event!