2016 Stoney Creek Chamber Community Achievement Awards GALA on May 17, 2017 at Winona Vine Estates In 1967, the Stoney Creek Chamber initiated its first Citizen of the Year Award.  Since then, the recognition has been expanded to recognize great citizens and businesses that have distinguished themselves with outstanding contributions to our community.  Every year, a wonderful Gala is held in honour of the award recipients.

Citizen of Year The Citizen of the Year award is presented to an individual who continually gives of themselves and helps many others in the process. Their outstanding contributions to Stoney Creek in community service and volunteering define excellence in character and contribute to improving the lives of our citizens.

Marie has had longstanding ties to the Stoney Creek community and has been a dedicated volunteer for most of her life.  She has volunteered and is a member of Friends of Battlefield Museum, has been a Board of Director for Canadian Club of Hamilton, Stoney Creek Historical Society, member and chair of Wentworth County Libraries…and the list goes on!  She also was award ed the Rotary – Paul Harris Fellow Award for Service Above Self…not once…but three times!  She has been a teacher and a florist and is a wife, mother and friend to many! 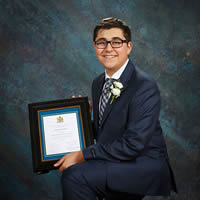 Joshua was 17 years old and a student of Cardinal Newman who had already logged 450 volunteer hours. He was very active in his school, supporting a mental health program for grade 9 students as well being a peer mentor.  He was awarded the Max and Stella Rotman Humanitarian Award in June of 2016 and he also had received the Living the Spirit award, and the Valedictorian Award from the Hamilton Catholic District School Board in 2013.

Alicia had been on the Honour Roll every year.  She volunteered both within her school but also within her community at Good Shepherd and Clarion Nursing home and logged over 1800 Christian community hours. She had been awarded the Max and Stella Rotman Humanitarian Award, the City of Hamilton Susan E. Bennetto Award, and the Youth Award from the Optimist Club of Stoney Creek.

Legacy Award   The Legacy Award is awarded to a business that has a longstanding history in the community and the 2016 winner was Mohawk College who was celebrating 50 years of providing quality education in our community. 2016 Winner – Mohawk College – Award sponsored by Fuller Landau LLP 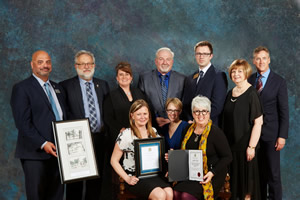 Mohawk College has alongstanding commitment to training students and getting them ready, FUTURE READY, for the challenges they will experience out in the workforce.  Accepting the award on behalf of Mohawk College was Wayne Ostermaier, Acting Dean, School of Skilled Trades.

Joe and Nadia Gigliotti have been in business in Stoney Creek since June 1985 and have been active volunteers and community supporters.  They were involved with Flag Day celebrations and the Santa Claus Parade and were active fundraisers for their church and community.  Accepting the award for Precise Car Service was Gary Bernard as Joe and Nadia were not able to attend the celebration.

2017 Nominations There is a long history of great achievers in our community and each year it is thrilling to be able to see the great nominations that come in. Nominations are now open for the following categories: Outstanding Large Business Achievement Award Outstanding Small Business Achievement Award Junior Citizen of the Year Citizen of the Year Call the office today! 905-664-4000 Nominations may be mailed to our office or sent via an email attachment to: admin@chamberstoneycreek.com